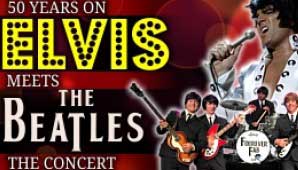 Elvis Meets The Beatles' 2015 concert celebrates the 50th anniversary of the famous meeting between the world's most iconic and influential recording artists of the 20th century.

It's 50 years ago that the Beatles finally met their idol, Elvis Presley, at his home in Los Angeles. When the group travelled to the U.S. in 1964, they frequently cited Elvis as a major influence.

Most recently recognized as "The World's Best Elvis Performer" after topping a global fan poll, Chris Connor will co-star in this, his first, Australian tour along with the biggest names in Beatles tributes.

To commemorate the 50th Anniversary, they will also be recreating the actual meeting of Elvis and The Beatles with a live Jam session of joint hits and covers that both performed or recorded. A once in a life time concert commemorating 50 years of musical history.

If you are planning to go to this event, you’ll be glad to know that our Surfers Paradise Holiday Apartments are just minutes away from Jupiters Theatre.

Our accommodation offers a choice of one bedroom and two bedroom apartments. Whether you’re travelling as a couple, with your friends, or with your colleagues, we have apartments for you.